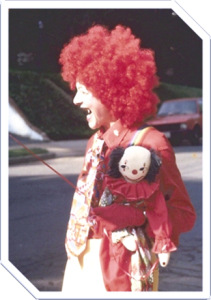 When I returned from the Omega Institute after two weeks of learning clowning, I wanted to try my new talent in the streets of Washington, D.C.  I made plans to meet a friend down at Washington Circle for an adventure.  At Omega, I learned nothing about the outer clown’s face or wardrobe.  Little did I know that the inner clown, which I did experience at Omega, was not even taught in classes in the D. C. area.  Thus it was that I was what is called a lipstick clown and didn’t even know it!  A lipstick clown is one who applies makeup without using face lines, and does not set the makeup first with powder and then with water.  One can swim in a pool and properly applied makeup will not come off.

I put on colorful clothes and, because I had not found my size 17 tennis shoes yet, I wore blue swimming fins on my feet.  I had three helium balloons tied to my belt, and I started off.  Removing my fins so I could drive, I got as close to the subway as I could and parked.

Getting out of the car, I got myself together, ready for my first adventure.  I walked up the side street to Wilson Blvd. and all of a sudden I was on!  People began to honk and wave and shout HI!  Washington, D. C. was much friendlier in 1981 than years later. There were only two blocks to the Metro.  I passed a car dealer’s on my right.  Sears Roebuck was across the street.  I was only a few strides from my cross street when all of a sudden it happened.

To my right, down the side street came a policeman on a motorcycle followed by a hearse and a funeral procession.  I was near the Arlington Funeral Home!  I panicked, and tried to make escape plans.  I couldn’t go forward, as the police escort was now there making a left in front of me, which cut off that route, too.  To the right was the funeral procession now in full view coming down the side street.  Retreat didn’t seem possible, so as a last resort I drew in a long breath and asked for inner guidance; What shall I do?

Miraculously, in a calm, clear voice I heard, WAAAAAAVE TO THEM.  It was the long, slow, deliberate WAAAVE that was the clue!  Instantly, I planted my two blue flippers on the curb and looked up confidently just as the hearse passed by and the car bearing the immediate family was appearing before me.  My right hand spontaneously started a wave, an action that was more like a slow motion salute of respect.  I was so close to the passengers in the mourners’ car directly behind the hearse that I could look into their tear-filled eyes.  And without exception, including the two children, each person looked into my eyes, with a little smile breaking out in surprise, and waved back.  I stood there planted in my spot slowly waving my salute of respect.  As the long procession went by and the sweet responses returned from the mourners, it truly felt like we were together, painting a cosmic vision of the triumph of life over death.