New Fables from the Future

I am reminded of the Starry Telling activity our Pink Flamingo Clown Troop created.  This activity was instigated by Rev. Absurd.  One of the focuses of our group Starry Telling was to create new fables, new legends, and new stories for the human race.  Einstein said, “You can’t solve problems on the level they were created.”  He also said, “Imagination is more important than knowledge.”

Dennis Kucinich was focused on creating a Department of Peace.  Our Starry Tellers were facilitating groups of people coming together to create a hopeful future.  We were mainly a troop of therapeutic clowns, clown facilitators, who get people to participate in uplifting experiences rather than being observers.  We often started our groups by asking people to imagine they were from the stars and were bringing a gift to planet earth.  And even if they didn’t think they had a gift to bring, to pretend they were a child again; and if they DID KNOW, what would the gift be? 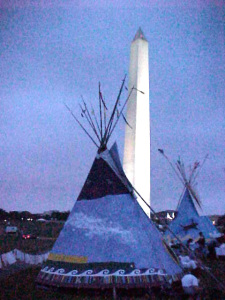 There were children in the group, giving us an inter-generational feeling and children’s humor.  Some of the clowns used simple lines on their faces like starry tellers of Native American culture.  Some wore Indian blankets, and we used a talking stick.  Since Native Americans have many legends that teach that they came from the stars, the whole atmosphere was around those legends with a campfire in the center of the circle.  One clown had a TIPI, and we got to use it on the National Mall in Washington, D.C. during a ceremony.

We were always amazed at what a group of people would come up with when the focus was on coming from the future, bringing treasures as solutions and group sharing.  Often we would sit around and talk about how the gathering seemed orchestrated and all seemed to fit together.  One thing for sure, we all felt uplifted, joyful and hopeful about being humans and humanity after we finished our sessions.  Before I moved here an old friend of mine, Nina, said she had a gift for me.  She had purchased it from the artist years before, and always knew she would be giving it to someone, but who?  When we started our Starry Telling group, although she was not part of it, she said she knew this carving was for me.  I was overwhelmed!

This is the “Storyteller” and the legend that goes with her. 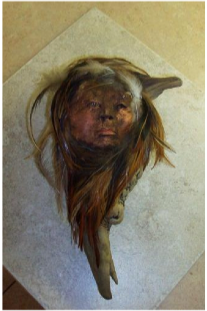 NINA, who gifted me with this carving, died last year.  Perhaps she is among the stars now, looking  down and blessing our stories.