There are four (4) kinds of clowns on this planet. The White Face was the original clown. They have a white face, a frilly collar, and small feet. They get everyone in trouble, but they are lily white!

The next is the Augúste Clown with a huge wig, red nose, exaggerated features, and huge feet. These originated in Europe.

The third the Hobo or Tramp Clown was born after the Depression in America when professional men left their careers and hopped on freight trains. They wear demolished tuxedos and are infinitely and eternally sad and downcast.

The fourth type the Character Clown is one who has a story to tell. Only men were allowed to be clowns like the Kabuki Theatre in Japan where men played all the feminine roles.

“Rev. Absurd” is an Augúste Clown. Here I am, putting on my makeup!

The Augúste clown was born in Germany on a theatrical stage. There was a janitor who was backstage cleaning up, but decided it would be fun to try on some actors makeup. He was having a great time when the owner of the theatre walked in, catching him red handed. The owner picked up the broom and started chasing the janitor, who mistakenly opened up the door to the stage instead of the door to the alley for his escape. There the janitor was running for his life face made up being chased across the stage. The audience, thinking it was planned, began to laugh and clap their approval. Since that play had a poor box-office approval, the owner realized this was a plus and ended up incorporating this antic in the play and hiring the janitor for the role.

When you study clowning, you are typed. There is an inner clown in everyone. As you put your makeup on, your inner clown emerges quite magically. Through the years, “Rev. Absurd” began to be quite comfortable in my skin and on occasion he would more or less take over with some bright idea he just couldn’t resist! 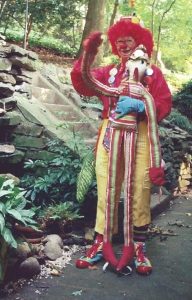 Such it was one Christmas season when “Rev. Absurd” decided it would be fun to go down to the live Christmas crèche of darling baby animals with a light-hearted atmosphere at the Methodist Church at the end of the street from the TAO Humor Center. He had a pair of size 17 tenny’s with smaller tenny’s and socks over them which slipped inside and looked like the feet went right into the shoes. The rest of the outfit was normal. My husband decided not to join me in this event, so off I went down the street.

It was dusk and the little goats and lambs were romping around. It was between pageants, so the stable was empty and people were just milling around. I began to notice that people would look at my feet then quickly look away. I couldn’t believe that Methodists were that polite, so I decided to go inside and get some hot apple cider. Fortunately, there happened to be a black janitor way up on a tall ladder fixing the lighting. He looked down on me, pointed his finger and loudly said, “Your feet aren’t THAT big!” and started in on a big loud, hearty, laugh! Well, that broke the ice and we all enjoyed a good Yule-tide laugh!

It turned out that I eventually became a member of that Church and they had many ideas for me to clown. Methodists DO have a great sense of humor, too. However, this experience which I would call my longest Christmas crèche experience caused me to rethink Reverend Absurd’s sense of humor and check it out thoroughly before I go ahead.