ONE of the activities that the Pink Flamingo Clowns created was dramatizing and acting out the children’s classical book, Ferdinand.  It is about Ferdinand, a peaceful bull who accidentally sat on a bumble bee and became furious!  Since there was a search on for a special bull for the bullfight, he was thought to be the perfect angry bull.  He was carted away to the bullfight, and it turns out that his performance in the bull ring was a fiasco to everyone except peace lovers.

The Pink Flamingos made props for every character, including a read satin cape for the toreador, balloon swords for the picadors, funny hats for the men who come to cart Ferdinand away, a cowbell for Ferdinand’s mother, and a bumble bee for Ferdinand to sit on. 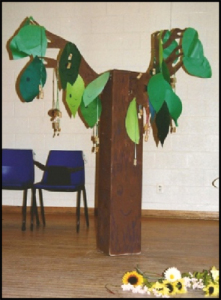 My favorite part was the Cork-Tree.  We tied clumps of corks together on fishing line in two or three foot lengths.  These were draped over the fingers and outstretched arms of the living Cork-Tree so it looked like it had clumps of corks ready to be harvested.  Since the story is in two scenes, it was possible to recast everyone except Ferdinand so they could play a role in the first and second scenes.  With about thirteen people you could act out the whole story.  The reader would read the book out loud, sentence by sentence, and wait for it to be acted out.

I sometimes facilitated this fun as a clown.  At a Children’s Book Fair in Washington, D.C., there were about thirteen grade-schoolers who acted it out, and they had never heard the story!  What was most fun was taking it to another clown troupe as part of their monthly meeting.  We actually went through it twice and switched the roles around.  It was SO FUN!  It is amazing how much fun improvisation is!  People really got into the emotions and feelings of their characters. 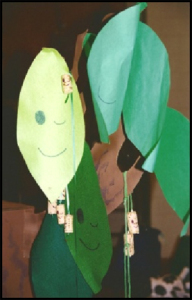 Our Pink Flamingo Clown Troupe got so carried away that someone wrote a whole play about Ferdinand, and got everyone interested in gong to a Senior Center and presenting it.  Since I was more interested in spontaneity and getting others to play (instead of being an actor with an audience), I offered to make the cork-tree with felt leaves and smiling, winking corks.  Herb offered to take pictures. 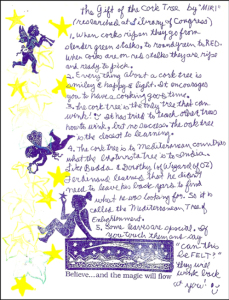 I brought most of the Ferdinand props and the book here to Colorado.  I have them in storage here with some other clown props.  Who knows–I may have an opportunity to use them.

Last Friday I located a local Laughter YOGA group at a YMCA not far from here.  Things are looking up!  And Jesus did say, “You must become as a little child to enter the Kingdom of Heaven.” Matthew: 18 vs 3.