Today we are moving into Paradise. Up until now we have had to contrast what is now coming to Earth; the New Heaven and the New Earth, the Golden Age. Miri calls the direction in the East, Paradise; the direction of the South, the Land of Milk and Honey, the direction of the West, the Garden of Eden and in the North, the Promised Land. Now we are imagining that these four directions in each Sepheroth or Medicine Wheel have all merged into the center and brought clear down to Earth the inheritance which is promised by Mother/Father/God to His/Her children.

I had hoped this Paradise Section would lead us right into our Ascension, or bring down Heaven onto Earth. All of us, the Light Workers, felt sure it was time for manifestation. Not just know how much work is being done in the inner planes and in the physical. But alas, here we still are.

On Thanksgiving, 2018, Miri started to write for our Web again. I am posting the one she wrote today. Miri stopped writing on February 6,2018, in the Chapter 3, ICAP, in this Paradise Web Section. This Web Section, Paradise, started on November 15, 2017.

Miri and I have believed for a long time there could be nothing more inspiring than for those who are ready, to go ahead and be allowed to ascend. This idea that we all go, or none go, or waiting until everyone is ready makes no sense to us. Even the IDEA of Lightworkers and Saints ascending would cause observers know for sure Ascension is real.

The Church calls it the Rapture. It’s right in the Bible, Revelations. I asked a minister’s wife, in the Hall last week if she was ready for the rapture? She was shocked, and said oh, no, that’s for the Endtimes! Hmmmmmmm! “We are the ones we are waiting for”, is really getting old.

What are we waiting for? Maybe we could do our imagining that we have stepped into Paradise.

Miri’s favorite Einstein quote:
“The Gift of Fantasy has meant more to me than my talent for absorbing positive knowledge” Albert Einstein 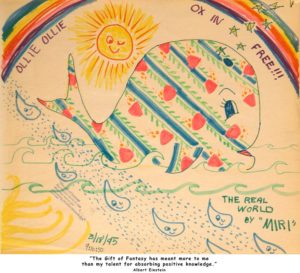