I had been the facilitator of the TAO Humor Center since 1982.  My clown, Reverend Absurd, had been born August 11, 1981 in the middle of Wavey Gravy’s clown class at Omega Institute, and my life was never the same.  After these 30 years I can truly say I believe everyone has a clown within them, crying to be released!

WORDS have been one of Reverend Absurd’s special ways of playing.  For instance, he proclaimed that his name pronounced backwards is DNEREVER DRUSBA WHICH SOUNDS very refined, learned, and scholarly.  An aspect of himself he has never shown me, but his name, backwards, DNEREVER DRUSBA sounds very French to me.

The TAO Humor Center (Totally Awesome and Outrageous) is a play on words from TAO, the ancient Taoist, Chinese religion and philosophy.  And there we were at the TAO Humor between the CIA and the Pentagon creating JOY, play, fun and laughter.  The Pink Flamingo Clown Troop creating the WAY.

TAO means the Way or the Path. Imagine my surprise when in the mailbox I found a serious ad from a medical supply house about laboratories, blood work supplies, syringes, needles, etc.  I looked at the envelope and it said the TAO Humor Center.  They meant to send it to us!

I went to the dictionary and looked up humor.  The first 4 definitions I had not been aware of as meanings for humor:
1) moisture akin to damp.
2) a normal functioning bodily semi-fluid or fluid (as blood or lymph).
3) a secretion (as a hormone) that is an excitant of activity.
4) 1 of the 4 fluids entering into the constitution of the body and determining by their relative proportions a person’s health and temperament.
5) characteristic or habitual disposition or bent, temperament, whim.
6) a sudden unpredictable or unreasoning inclination (whim).
7) a quality which appeals to a sense of the ludicrous or absurdly incongruous.
8) Something that is or is designed to be comical or amusing.

I thought about that and realized HUMOR is a fluid, moving, spontaneous, bringer of life that actually flows as fluids in your body and creates healing qualities in your body, emotions, thoughts and soul.  Science is proving the healthiness of laughter!

The Bible—in Proverbs—says: “A merry heart doeth like a good medicine.” 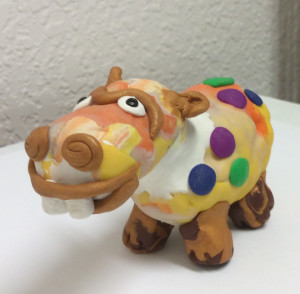 Reverent Absurd has always played with words. I had rubber stamps made and then created huge “business cards.” They were really Monkey Business cards.  The Pink Flamingos would come over and we would each stamp out our business cards.  In fact our motto is “Let’s stamp out this planet’s biggest problem—Seriously, Serious Seriousness”

1. Take the “S” off slaughter and what do you have?  LAUGHTER!
2. Lettuce pray!
3. They say I lost the race, but it was only by a hare!
4. Change your armor to amour!
5. And alliteration: Foundation for First Fun and Fantasy Folks from the Fantastic Future

Well, that’s it for now.  WORDS are fun!